MDMA
MDMA, or 'ecstasy' is a 'psychedelic amphetamine' that has increased in popularity over the past 20 years because of its ability to create strong feelings of comfort, empathy, and connection to others. It usully comes in tablet form, although it is occasionally sold in pills or as powder. It is taken orallymmost of the time and rarely snorted. MDMA use is closely linked to the underground rave (and dance club) scene throughout the entire world.
While 'ecstasy' is the most popular name for MDMA, the actual definition of ecstasy is any pill or tablet represented as MDMA on the street. Ecstasy pills are frequently cut with other drugs, more so than most other street drugs, and usually contain either caffeine, ephedrine, amphetamines, MDA, MDE, DXM, or--in rare cases--DOB, and sometimes don't contain MDMA or any psychoactive at all!
A regualr oral dose of MDMA is between 80 - 150 mg. The cost of MDMA varies depending on where it's purchased and in what quantity. A single pill bought at a rave can cost as much as $50, but the usual price is between $20-$30. Purchased in larger quantities, MDMA generally sells for $100-$250 per gram (about $10-25 per pill), with wholesale prices as low as $50 per gram. MDMA is an illegal substance in the United States (Schedule I) and in most other countries. It is also listed as Schedule I in the International Convention on Psychotropic Substances, an international drug control treaty.
The most common effects of MDMA last approximately 3-4 hours when taken orally. For many people there is an added period of time (2-6 hrs) where it is difficult to rest and there is a very noticeable difference from everyday reality, but not a strong enough difference to be considered 'rolling'. Many people also experience a significant shift in mood for several days after use; for some this is a time of depression while others experience lifted mood. MDMA can be psychologically addicting. Individuals who regularly use MDMA may find that they have an increased desire to continue using it. 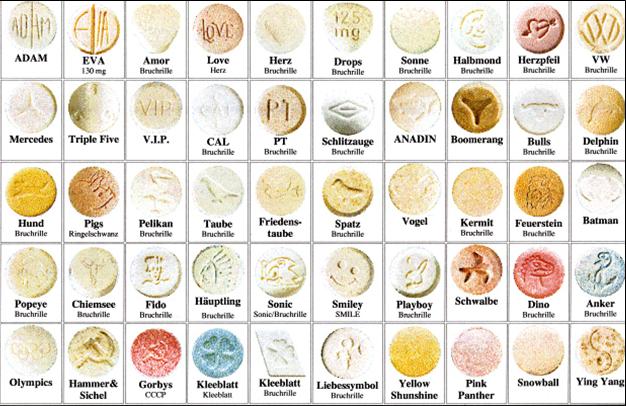 ANIDA-supported study has provided the first direct evidence that consistent use or abuse of MDMA, popularly known as "ecstasy," causes brain damage in people. Using advanced brain imaging techniques, the study found that MDMA damages neurons that release serotonin, a brain chemical believed to play an important role in controlling memory and other functions. In a related study, researchers found that MDMA abusers have memory problems that last for at least two weeks after they have stopped using the drug. Both studies suggest that the extent of damage is directly connected with the amount of MDMA used.
Dr. Joseph Frascella of NIDA's Division of Treatment Research and Development says, "The message from these studies is that MDMA does change the brain and it looks like there are functional consequences to these changes". That message is particularly important for young people who attend in large, all-night underground dance parties known as "raves," which are very popular in many cities around the world. NIDA's epidemiologic studies show that MDMA (3,4-methylenedioxymethamphetamine) use has risen in recent years among college students and young adults who attend these social gatherings.