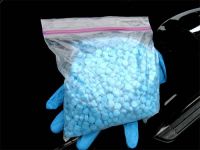 An ecstasy overdose occurs when someone consumes more ecstasy than their body can tolerate. Ecstasy users are constantly flirting with the risk of a drug overdose. There is a fine line between the high they're seeking and serious injury or death. People who suffer an ecstasy overdose will experience overheating, panic attacks, faintness, severe dehydration and loss of consciousness. Ecstasy raises the user’s body temperature and makes them feel restless. These restless feelings often lead users to feel as though they have to keep moving, literally causing them to overheat and cook their insides. Some People who have had an ecstasy overdose and died have had body temps over 108 degrees.

Another way people die from an ecstasy overdose is by taking fake ecstasy pills. Because ecstasy is made on the black market, users never truly know what is in the pills they are taking. The drug dealers who are making ecstasy do not really care if they use the right chemicals or not and how that will affect the people who they sell the drugs to.

While many who suffer from an ecstasy overdose recover without long term effects, there can be serious consequences. Some experience the failure of major organs such as their kidneys or liver, while others suffer from the failure of whole systems like the respiratory or circulatory systems. Patients who survive an ecstasy overdose may need kidney dialysis, a kidney or liver transplant, or ongoing care as a result of heart failure, stroke, or coma. Death can occur in an ecstasy overdose situation, particularly if treatment is not started immediately. Ecstasy-related emergency room incidents increased nationwide from 250 in 1994, to 637 in 1997, to 1,142 in 1998, to 2,850 in 1999. Between 1998 and 2001, the number of Ecstasy-related emergency room visits in San Diego County increased from 14 to 51, said John Redman, co-chairman of the county Club Drug Task Force. "I am very alarmed by the numbers," said Redman. "The kids that are taking it are unaware of the dangers."

Ecstasy is a Schedule I synthetic, psychoactive drug possessing stimulant and hallucinogenic properties. It possesses chemical variations of the stimulant amphetamine or methamphetamine and a hallucinogen, most often mescaline. Illicit use of ecstasy did not become popular until the late 1980s and early 1990s. Ecstasy is frequently used in combination with other drugs, which increases the user’s risk of an ecstasy overdose. However, it is rarely consumed with alcohol, as alcohol is believed to diminish its effects. Ecstasy is most often distributed at late-night parties called "raves", nightclubs, and rock concerts.

Warning Signs of an Ecstasy Overdose:

An Ecstasy Overdose is Characterized by: